by Adam Johnson/Fairness and Accuracy in Reporting

A reporter at the most influential paper in English-language media appears to not know the difference between a government “tightly editing” and selectively editing video. 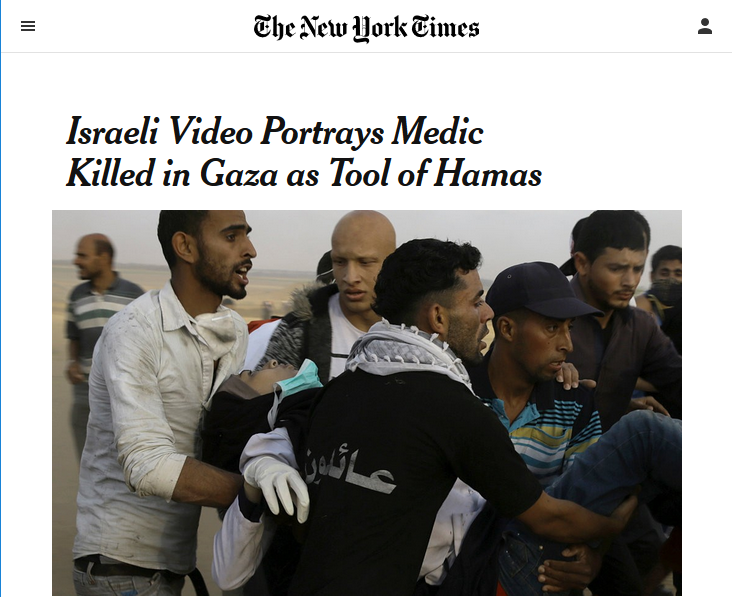 New York Times reporter Herbert Buchsbaum (6/7/18) wrote up a propaganda video posted by the Israeli Defense Force, showing Rouzan al-Najjar–a 21-year-old medic the Israeli Defense Force shot and killed earlier this month—apparently throwing a tear-gas canister, along with a brief clip of her purportedly saying, “I am here on the front line and I act as a human shield.”

The video seems to suggest that throwing a device spewing caustic gas away from people into an empty field is a sort of violence. (“This medic was incited by Hamas,” the video reads as she grabs the canister.) But the primary problem with the IDF video is that it deceptively edits her comments to distort what she said—a fact not noted by the Buchsbaum until paragraph 20, when he threw in this crucial piece of information:

In the longer video, the comment that the military translated as “I act as a human shield” was part of a sentence in which Ms. Najjar said, “I’m acting as a human rescue shield to protect the injured inside the armistice line.”

“Acting as a human shield to protect the injured inside the armistice line” has a radically different meaning than the commonly understood canard about Palestinians using “human shields” to protect “terrorists.” This hugely consequential fact should have led the story; instead, it’s casually tossed out in the third-to-last paragraph. The story here is that the IDF—as it has been doing for decades—casually lies and distorts facts to suit its narrative. Like all militaries, the Israeli military is not presenting a “dueling narrative” in good faith, as a New York Times tweet suggested; it’s manipulating video, hoping credulous journalists help them muddy the waters, as Buchsbaum did.

Indeed, the bizarre IDF press release write-up serves no other purpose than to reframe the gunning down of the unarmed medic from a clear crime committed by Israel to a Fog of War “dueling narratives between Israel and Hamas” tale of “both sidesism.” Buchsbaum vaguely alludes to—but strangely omits—the deceptive editing in the opening with his risible turn of phrase in paragraph two:

The tightly edited video shows a woman identified as the medic, Rouzan al-Najjar, throwing what appears to be a tear-gas canister.

“Tightly edited”? What does this mean, exactly? “Tight” editing is generally considered a compliment in the film and TV world, and says nothing about deliberate omissions for the purposes of misleading the viewer. When videographer Tate B. James confrontedBuchsbaum about this fact, Buchsbaum appeared to think he had covered his bases:

hey herbert, any reason why you waited until the 20th paragraph to let folks know the video was selectively edited?

a music video is “tightly edited”, herbert. that video is *deceptively* edited. there’s a difference

Either Buchsbaum doesn’t know he’s being misleading, and is thus severely unqualified to be writing for a major paper, or he knows he’s spinning in Israel’s favor, but was hoping no one would really notice. Either way, the New York Times is once again (FAIR.org, 7/14/17, 5/17/18, 5/15/18) using its pages to confuse readers to the benefit of the Israeli military.

You can send a message to the New York Times at letters@nytimes.com (Twitter:@NYTOpinion). Please remember that respectful communication is the most effective.