Reporters Without Borders (RSF) calls on the US military authorities and the Japanese government to explain why the US military based on the southern island of Okinawa are conducting extensive surveillance of Japanese citizens, NGOs and journalists.

The surveillance is revealed in 305 pages of documents published by British journalist Jon Mitchell, who obtained them under the US Freedom of Information Act. They consist of internal “intelligence bulletins” issued by the Criminal Investigation Division of the US Marine Corps in Okinawa Prefecture in May, June and July, emails written by senior officials and reports circulated by the US military police in one of the US camps.

One of the bulletins, dated 9 June, described a lecture that Mitchell gave about the US military’s environmental contamination. It included a photo and short profile of him. One of the emails describes him as “adversarial” and says his “tone of reporting is hostile.” Another says: “Cooperation with reporter has consistently been a non-starter. He has an agenda and is fairly open about it.” 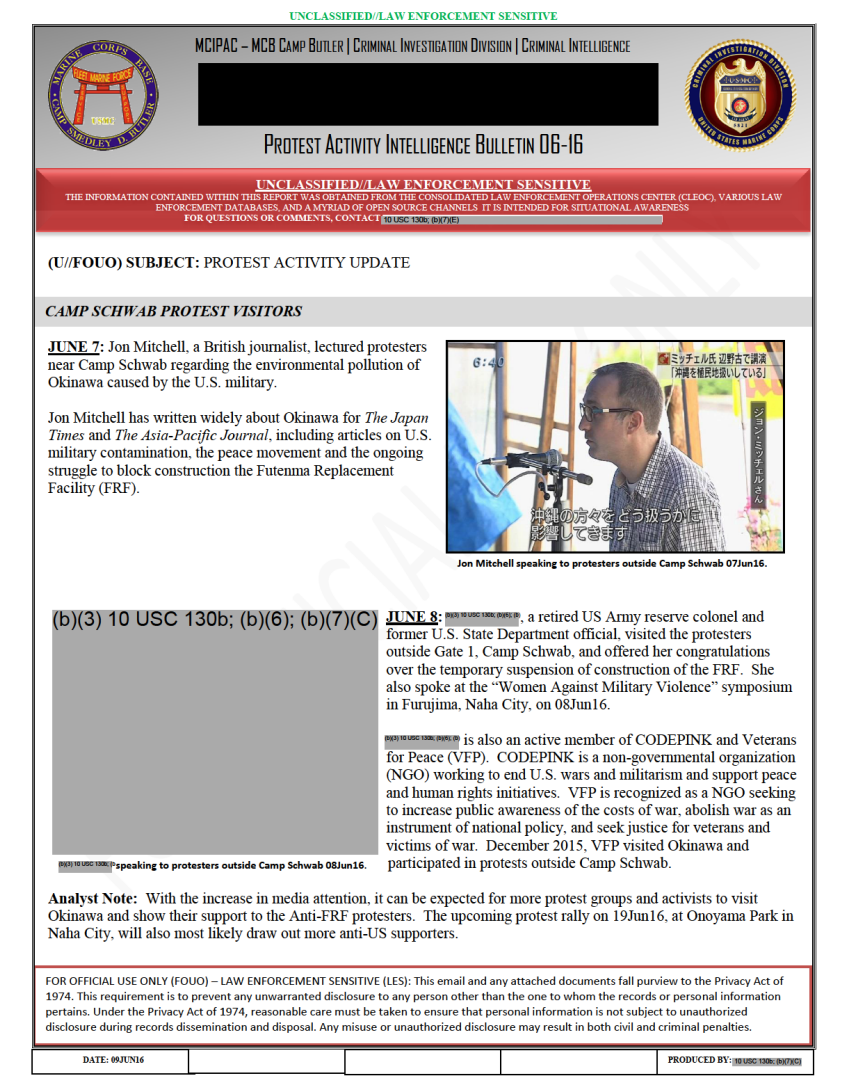 According to Mitchell, the US military are spying on him because of his journalistic activities, above all his coverage of their operations in Okinawa Prefecture and his revelations about environmental damage resulting from the US military presence and their disposal of chemical weapons on the island during the Cold War.

He thinks his coverage of local pacifist movements, protests against the US military bases and Japanese government policy is an additional reason for the decision to keep him under surveillance.

“We are extremely disturbed by the documents obtained by this British journalist because they clearly show that the US military are spying very closely on everything he does in Japan in connection with his work ,” said Benjamin Ismaïl, the head of RSF’s Asia-Pacific desk.

“In the light of these documents, we call on the US military to explain the decision to place Jon Mitchell under surveillance. The Japanese government must also clarify its role in these activities by the US military in Japan because it compromises its duty to guarantee media freedom.”

RSF has tried to reach the US Marine Corps in Okinawa because it believes it should explain its spying but it did not respond. When reached by Mitchell, the Pentagon refused to confirm whether it was aware of the extent of the surveillance or at what level within the Defence Department it had been authorized.

Tests carried out by RSF established that Mitchell’s IP address at his home is subject to blocking. He cannot access several US military websites including the website of Kadena Air Base in Okinawa Prefecture:
www.kadena.af.mil .

Mitchell is not the only journalist to be targeted in connection with their coverage of the protests in Okinawa Prefecture. Riot police detainedOkinawa Times and Ryukyu Shimpo reporters while they were covering protests in August against the construction of US military helipads in the north of the prefecture.

The reporters were taken away from the protests although they had identified themselves as journalists to the police. The two newspapers and mass media labour unions condemned the actions of the police as “a serious violation of the free press by the state.”

Prime Minister Shinzo Abe’s government nonetheless endorsed the actions of the police, setting a dangerous precedent for journalists covering future demonstrations. Last year members of the ruling Liberal Democratic Party said financial pressure should be put on newspapers such as Okinawa’s two main dailies which are critical of government policies while a former board member of national public broadcaster NHK said Okinawa Times and Ryukyu Shimpo should be dismantled all together.

On the eve of a visit to Japan last April by David Kaye, the UN Special Rapporteur on the Promotion and Protection of the Right to Freedom of Opinion and Expression, RSF issued an evaluation of freedom of the media and information in Japan that described the situation as disturbing.

Respect for media freedom has declined significantly since Shinzo Abe became prime minister again in December 2012. Japan is ranked 72nd out of 180 countries in RSF’s 2016 World Press Freedom Index – its worst position since the Index’s creation in 2002.

Reporters Without Borders, a nonprofit organization that advocates for press freedom, condemned the U.S. military and the Japanese government Sunday for allowing the surveillance of Jon Mitchell, because “it compromises its duty to guarantee media freedom.”

Chief Cabinet Secretary Yoshihide Suga said Monday the government is in no position to comment on the activities of the U.S. military, but he added that the government observes press freedom.

“The Japanese government does not reject any lawful protest in Okinawa,” Suga said. “We have never pressured journalists or media organizations.”

According to Mitchell’s report published last Wednesday by The Japan Times, the U.S. military also collected information about Japanese protesters and citizens’ groups.

U.S. Forces in Japan said Mitchell’s allegation that they “spy” on protesters and reporters is “absolutely false,” and that they are observing the actions of protesters and other activities for security purposes.

“Ensuring the security of our installations and observing the actions of protesters and other activities along the base fence lines and at the gates is not only authorized by agreements between the U.S. and Japan — it is necessary for the safety and security of our people and our operations,” U.S. Forces Japan spokesman Maj. John Severns said in an email.“We are also authorized to view publicly available websites and read local newspaper articles about the protesters and public figures on Okinawa. Such basic observational functions are not illegal, not a violation of the First Amendment, relevant Japanese laws, or U.S. military policies and procedures,” he said.

The latest round of condemnation joins mounting criticism by such organizations as the United Nations to the effect that press freedom has come under siege since Prime Minister Shinzo Abe took office.

Among 268 documents Mitchell obtained through the Freedom of Information Act was a bulletin issued by the Camp Butler Criminal Investigation Division that described a lecture Mitchell gave near Camp Schwab on the military’s environmental contamination. It included his profile and photo. One email described Mitchell as “adversarial” and said his “tone of reporting is hostile.”

The revelation came as Mitchell investigated why his access to U.S. military websites was blocked after he reported on the discovery of dioxin near two military schools within Kadena Air Base.

President Barack Obama is known for his tough stance against whistleblowers, and journalists have been subpoenaed to disclose anonymous sources related to acts of terrorism and criminal conduct.

But none of Mitchell’s activities have been deemed illegal or related to criminal conduct. Lawrence Repeta of Meiji University said if Mitchell’s allegation is true, it would constitute a violation of the right of free speech.

“I understand that U.S. government officials might be embarrassed by the information that has been disclosed by him. But there is no justification for the U.S. government to spy on journalists,” Repeta said.